Skip to content
HomeNewsSupreme Court to rule on Aadhaar today 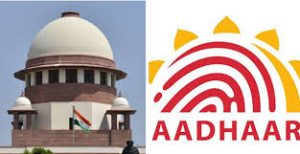 The Supreme Court will on Wednesday pronounce its much-awaited verdict on the Constitutional validity of the 2016 Aadhaar Act, the question of reservation in promotions, and whether live-streaming of court proceedings should be allowed.

A five-judge bench of Chief Justice of India Dipak Misra and Justices A K Sikri, A M Khanwilkar, D Y Chandrachud and Ashok Bhushan, which took up the petitions challenging Aadhaar on January 17 this year, had reserved its verdict on May 10, after a marathon 38-day hearing.

While it was conceived and implemented during the UPA-II era, the unique identity project got statutory backing only in 2016, under the Narendra Modi government.

Though it was initially linked to social welfare schemes, the unique identity was later tied to bank accounts, financial and property transactions, filing of IT returns, and even cell phone services.

This raised concerns of privacy and a petition was filed by retired Karnataka High Court Judge K S Puttaswamy in 2012. Later, more petitions were filed regarding different aspects of the project. The petitioners contended that personal data collected under the project could be misused and lead to a surveillance state.

The petitioners got a fillip in August 2017, when a nine-judge Constitution bench of the court headed by the Chief Justice of India J S Khehar declared the right to privacy as a fundamental right. However, the court also noted that “besides national security, the State may have justifiable reasons for the collection and storage of data. In a social welfare state, the government embarks upon programmes which provide benefits to impoverished and marginalised sections of society. There is a vital State interest in ensuring that scarce public resources are not dissipated by the diversion of resources to persons who do not qualify as recipients.”

The privacy aspect of Aadhaar was then taken up by the five-judge bench headed by CJI Misra.

During the hearing, which spread over four months, the Centre defended its decision to link Aadhaar to social welfare schemes, saying this had ensured that subsidies went to the right people. It also touched upon the national security angle, saying it had a vital role to play in curbing terror and preventing money laundering and crime financing.

But when the government tried to rely on an earlier order of the court to justify the decision to seed cellphone connections with Aadhaar, the court said the government had wrongly interpreted its order.

In June 2017, a two-judge bench of the court had upheld the government’s decision to link Aadhaar with PAN cards but refused to make it compulsory for those who don’t have an Aadhaar card, till the Constitutional Bench’s decision on the privacy issue.

The petitioners have also challenged the decision to pass the Aadhaar Act as a Finance Bill.

The reservation in promotions matter pertains to whether the Supreme Court’s 2006 decision in the ‘M Nagaraj and others Vs Union of India’ case requires any reconsideration. In that case, the court had ruled that though the state was not bound to provide reservation for Scheduled Castes and Scheduled Tribes in promotions, it could do so, subject to fulfilling some conditions.

The state should collect quantifiable data showing the backwardness of the group and its inadequate representation in public employment, ensure that reservations do not breach the 50 per cent ceiling, or adversely affect the creamy layer, or extend it indefinitely. It should also not affect administrative efficiency.

Citing the Nagaraj ruling, several High Courts have struck down decisions on reservation in promotions in their states, following which the states filed appeals in the Supreme Court.