Last week, a Noida woman filed a complaint against her husband after he sent her a talaq over email for being “too dark-skinned”. The 26-year-old research assistant at a city-based pharma company said that her husband had humiliated her for the colour of her skin right from day one, and that he had always emphasized his
Read More

First comes marriage, then the honeymoon… then divorce? Delhi’s counsellors and lawyers say that couples wanting to get separated right after their honeymoon is increasingly common today.Earlier this month, a Lucknow-based couple went to Goa on honeymoon. On the flight back home, the husband got so angry after the argument, that he quietly got off
Read More

Given the ease with which a case can be filed in India, especially against men, what does one do, when faced with a false criminal case and the police is hounding an innocent? Naturally, the person would apply for anticipatory bail and thus approach courts. However, when the very courts use the process of bail
Read More

Tuesday was a big day for Vinay, a young techie from the city. After all, he’d won a long legal battle -charges of cruelty slapped against him by his wife were proved false. Vinay had quit his job to prove his innocence in the two-year-old case. The FIR against him will be quashed soon. “I didn’t
Read More

Over 50 volunteers stormed the streets of Thane and Mumbai to raise awareness on Anti-Dowry Day, as they informed the people about the controversial section 498A of the Indian Penal Code and Dowry Prohibition Act, 1961. With cases in India pending in large numbers, the men and women activists are demanding quick redressal of such
Read More

A 30-year-old man was allegedly poisoned to death by his in-laws, after his wife moved to her parents house due to marital discord, in Jhakrai village here. The deceased, Ranjeet Singh of Kasganj town here got married to Sushila of Jhakrai village three years ago but soon after their marriage, many issues surfaced between them,
Read More

Judicial separation is an instrument devised under law to afford some time for introspection to both the parties to a troubled marriage. Law allows an opportunity to both the husband and the wife to think about the continuance of their relationship while at the same time directing them to live separate, thus allowing them the much needed
Read More

What is the time limit definition for the DV case to be filed after a particular separation period. Ld. Justice Roshan Dalvi has passed a recent judgement where it is mentioned that a DV case is not maintainable after one year of separation. IN THE HIGH COURT OF JUDICATURE AT BOMBAYCRIMINAL APPELLATE JURISDICTION CRIMINAL APPLICATION NO. 160 OF 2011 Sejal Dharmesh Ved ..  Applicant Vs. The State of Maharashtra & Ors. ..  Respondents Mr. Amit S. Dhutia i/b Niranjan Mundargi for the Applicant. Mrs. A. A. Mane, APP for Respondent No.1­State. CORAM :  MRS. ROSHAN DALVI, J. DATE
Read More 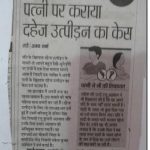