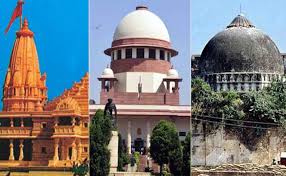 A Supreme Court decision on Thursday has ensured that the case of whether or not to build a Ram temple at the site of a razed mosque in Ayodhya will be heard from October 29. A three-judge bench led by Chief Justice of India Dipak Misra refused to revisit a 1994 ruling that the government can acquire land that a mosque is built on – a decision that means that the politically-charged temple-mosque dispute can be taken up without any delay.

In 1994, the court had ruled that namaz or prayers can be offered anywhere and a mosque is not essential. This allowed the government to take over the land where the 16th-century Babri mosque was razed in December 1992 by Hindu hardliners who believed it was built on Lord Ram’s birthplace.

The ruling at the time was only related to the acquisition of land, the court said in a 2-1 judgement, refusing to refer the decision to a larger bench for review.

“All religions, all mosques and temples churches are equal. We have already noticed all religious places are liable to be acquired as per 1994 verdict,” said Justice Ashok Bhushan, reading out a judgement that quoted King Ashoka.

One of the judges, Justice S Abdul Nazeer, disagreed and said whether a mosque is integral to Islam has to be decided considering belief and requires detailed consideration.

If it had decided to re-examine the decision, it would have delayed the Ayodhya dispute hearings even though it has no direct bearing on the title suit. The ruling BJP, which has promised its supporters a Ram temple at the disputed site, will hope for a decision before the 2019 national election.

Muslim parties said the 1994 decision was unfair to them and played a role in the disputed land in Ayodhya being divided in 2010 into three parts by the Allahabad High Court: it split the land between Hindu and Muslim parties, though the main part was given to Hindus. The 2.77-acre land was to be partitioned equally between the Sunni Waqf Board, the Nirmohi Akhara and Ram Lalla (infant Ram).

The high court decision has been challenged in the Supreme Court by Hindus and Muslims.